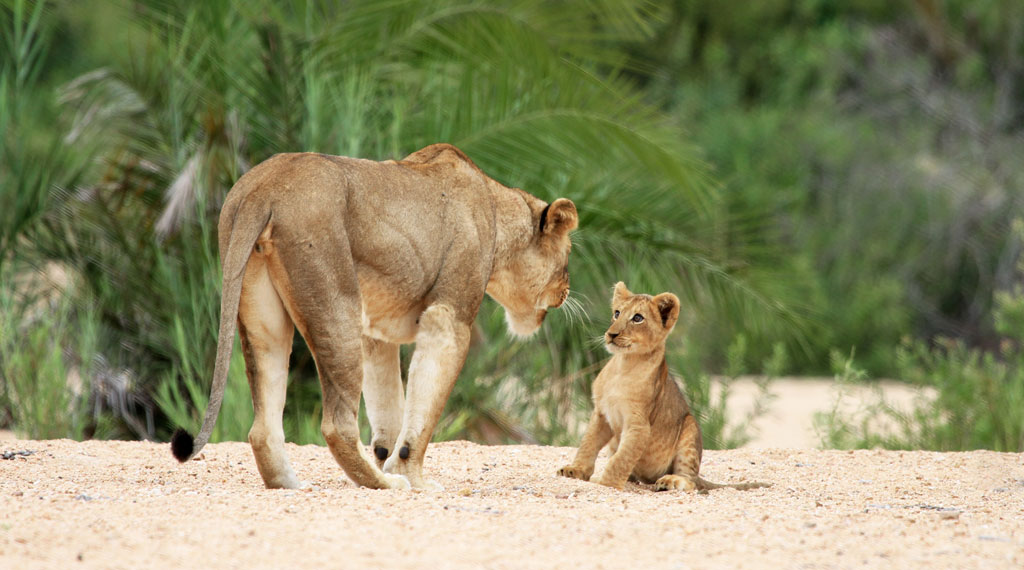 Welcome to our four-part series on “Protecting Africa’s Treasures”. Over the next four weeks, we will be discussing a variety of African species, Captured in Africa Foundation’s work and the work of our partners in protecting these treasured animals, and wildlife conservation generally, including what you can do to help, no matter where you are in the world.

We begin with an age-old favourite – cats and dogs. Only this time, it’s Africa’s wild version – magnificent lions and unique and often misunderstood African painted dogs. Both fierce hunters and carnivores, both social animals, and both in serious trouble. But friends they are not.

Lions are undoubtedly one of the most popular African animals, with their sheer power, majestic looks, striking manes and sleek, muscular bodies. Their mere presence brings feelings of exhilaration, especially hearing their powerful roars or witnessing a feeding frenzy, with their vicious snarls and growls. Yet, when they are resting, as they do for the majority of the day, lazing about in the sun, they seem peaceful and harmless. Revered by society, the lion is used to promote consumer goods from car brands to movie studios, and let’s not forget the much-loved Simba from “The Lion King”.

The African lion was once described in Samuel Johnson’s

Dictionary of the English Language (1755) as

“the fiercest and most magnanimous of the four-footed beasts”.

But, inexplicably, they are being destroyed in the wild. An animal so loved may soon be reduced to zoos and wildlife sanctuaries. Lion populations in the wild have declined by 96%, with now only approximately 20,000 remaining.

They are facing extinction in the wild unless drastic measures are taken.

An estimated 900 lions are slaughtered per year by trophy hunters. Many hundreds more are poached and trafficked into Asia for the lion bone trade, both legally and illegally. Between 2014 and 2017 there were nearly 3,000 lion skeletons exported from South Africa alone. Many big cat lovers might like to have a special piece of lion jewellery, but not literally. Part of the lion bone trade into Asia is for the production of pendants made with the claws and teeth of poached lions – a ghastly waste of these incredible animals for something completely unnecessary and superficial. A 235kg beast, already hurtling towards extinction, reduced to a piece of jewellery. This cannot continue.

When will people see lions for the animals they are – a living and breathing being – rather than a profitable piece of material?

Habitat loss, human/lion conflict and the illegal bushmeat trade are also severely impacting lion populations. With human populations ever increasing, our encroachment into wild animal habitats by increased agriculture and development is sending lions closer and closer to villages and livestock, resulting in retaliatory killings after hungry lions have taken their livestock. There are some positive results from programs working in these areas to build bomas to protect livestock and tracking lions to stop them before they get too close to these communities.

Captured in Africa Foundation works on the ground in a range of ways to save these amazing animals. The foundation is called in when a lion has escaped from a reserve or sanctuary, or finds itself in a compromised situation where its life may be at risk – where it is tracked, darted, vet checked and, where available, fitted with a tracking collar, before being relocated to a safe area. Other work involves relocating lions who have been deemed excess in wildlife reserves. These lions are moved to other reserves to enable them to continue living in the wild and reduce overpopulation in reserves, which can lead to culling.

With lion numbers already dwindling, this is important work to ensure the safety of lion populations across all reserves and Captured In Africa Foundation openly invite game reserves, national parks and other entities with lions and other animals, to contact our team whereby we hope to work together for the betterment of these animals, spaces and people.

Teaming up with Pit-Track K9 Conservation, the foundation has formed the “K9s for Big Cats” initiative, which uses tracking dogs to locate and rescue wild lions who escape from reserves and find themselves in trouble. A number of Pit-Track’s dogs have been trained to become accustomed to lions and are deployed with their trackers when the foundation is contacted by a reserve who needs help to locate and return their missing big cats. Lion caught on a fenceline safely relocated to another part of the Greater Mapungubwe (TFCA). Pictured Carl Thornton (PitTrack) and Drew Abrahamson (Captured In Africa Foundation)

The foundation also works with the Greater Mapungubwe Lion Project, an initiative in northern South Africa, Botswana and Zimbabwe to protect lion populations in the area. The project undertakes surveys and monitoring of lions, including informing farmers if lions are moving near their farms to help reduce human/lion conflict. Some of the lions in the area are collared, which can help to protect them from being hunted.

Love big cats and want to help them?

You can, even from afar! Here’s how;

Help to educate, raise awareness and understanding of the issues facing lions, including not participating in any cub petting or hands-on activities or interactions with lions, which lead to canned hunting. Travel ethically and responsibly, keeping the animals’ best interests at the forefront of your plans. Donations towards the work of the foundation via our website, or the purchase of goods from our online shop which contribute to our projects on the ground, are gratefully appreciated and put to direct use in saving these special animals.

Another carnivore that needs help is the African Painted Dog, also known as wild dog or African hunting dog. They are highly social animals, like lions, and are led by a dominant alpha breeding pair. There is a specific hierarchy within the pack, and it is the females who leave the pack at maturity, with the males staying in the group. The dogs have a distinctive fur pattern, hence the name “painted” dogs, and their markings are individual to each dog, with no two alike.

We all know that lions are hunters, but what is lesser known is that they have a very low success rate – only about 30% of their hunting attempts are successful. On the other hand, African painted dogs are said to be the best of all the hunters, with an 80% success rate. Impressive indeed. This is believed to be because they have a high level of communication and pre-planning within their pack, and hunt in groups of six to twenty dogs. Lions, on the other hand, have very little to no communication or pre-planning amongst their pride mates, but rather appear to seize on opportunities that arise and simply go for it.

Wild Dogs have a playful ceremony to bond for a common purpose for initiating a hunt. They will circulate in the pack, vocalising and touching to get excited and ready to hunt.

These unique painted dogs are listed as endangered in the wild, with only 6,600 left across Africa – less than 5% of their original population. In South Africa, there are less than 500 left, and it is believed that only two packs in the country have reproduced this year. The dogs are now found in only 10-25 countries, a significant reduction on the 40 countries they used to inhabit. Needless to say, these figures are grim.

Like many animals, the number one killer of these dogs is humans. They are hunted and killed by farmers, much like lions, and suffer from similar habitat issues. They are often the victims of road accidents, as well as disease from domestic dogs, which can wipe out entire packs with ease. One of their biggest issues is snares – nasty wire contraptions that trap these animals, causing serious injury and death. In a positive move, there are various snare art programs across Africa, which see these wire snares being retrieved from the Savannah and given to local artists to produce creative pieces of art for sale. This helps to raise funds for anti-snare programs, and educate and raise awareness about snares and the damage they cause to wild animals. The money provided to the artists helps their community and encourages them to become involved in sustainable and ethical business instead of potentially needing to turn to poaching to survive.

Painted Dog Conservation, based in Zimbabwe, is working towards protecting the local dog population with anti-poaching units, a rehabilitation facility which enables them to care for sick and injured dogs before being released back into the wild, and monitoring and tracking dogs to assist with research and education.

Captured in Africa Foundation’s tourism arm – Captured in Africa Safari For Change – offers visits to this facility as part of their eco-tourism efforts to learn more about these distinctive animals and receive educational talks from local conservationists. These safaris also offer the best possible tourist experience to view these elusive dogs in the wild. You know you have experienced something very special if you are lucky enough to come across them in their natural habitat.

Both of these animals play an important part in the wilds of Africa and need to be saved before it’s too late. Your role as a tourist or even a fan at home, goes  along way to conserving their future.

Join us again next week for our discussion on… Africa’s matriarchs.

Until then, please stay safe and look after each other.

They deserve better from humans, yet sadly approximately 10,000 lions remain in captivity in South Africa, abused as props for tourists, entertainment and many awaiting a fate from canned hunting and the lion bone trade to Asia. We can do so much better than this for our wildlife.