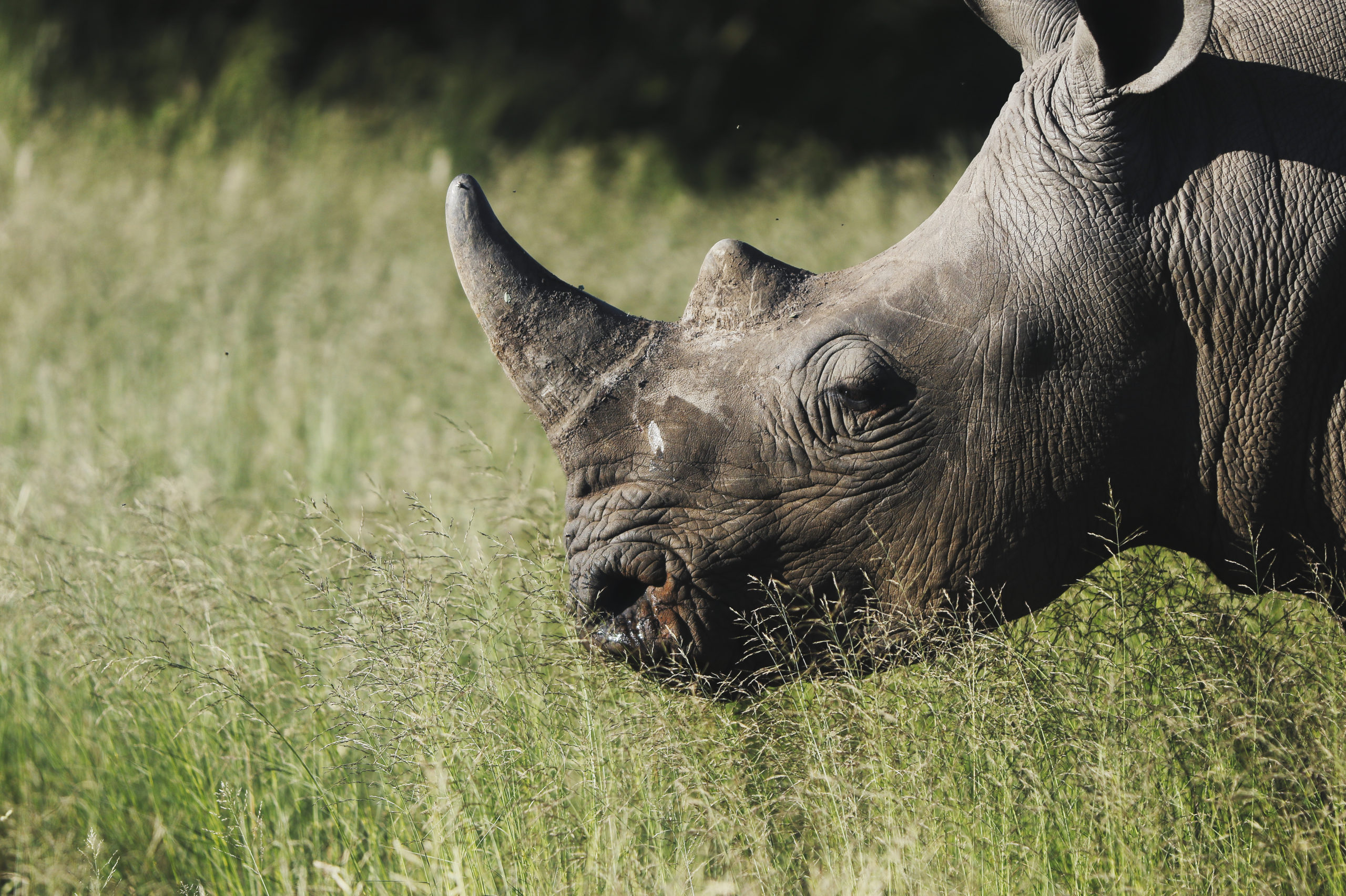 By CapturedInAfricaFoundation18th Jun 2020Uncategorised
No Comments

The two animals we are discussing today are completely different but have one unfortunate fact in common. One is one of the biggest and most well-known animals in Africa, and the other is small, rare, and mysterious. They are the formidable rhino and the little known but fascinating pangolin. What they have in common is that they are two of Africa’s most endangered animals. They are both poached in frightening numbers for their body parts and sent to Asia as part of the illegal wildlife trade.

There are five species of rhinos, with two in Africa – the white rhino and the black rhino – and three in Asia. The white rhino is the bigger of the two, weighing up to 3.5 tonnes, and is classed as “near threatened”. In the last two years, the northern white rhino subspecies has become extinct in the wild. Black rhinos weigh up to 1.5 tonnes and are classed as “critically endangered”.

Both species of rhinos are herbivores, but they do have different eating habits. Black rhinos are known as browsers, who get most of their food from trees and bushes, whereas white rhinos graze on grasses on the ground. They like to roll around in mud, which helps keep them cool under Africa’s hot sun. The mud also provides them with a natural sunblock and helps to stop insect and bug bites. The black and white rhinos have distinguishable parenting techniques – black rhinos, like many other animals, have their babies run along behind the parents, whereas the white rhino mothers encourage their calves to walk in front of them to allow her to keep an eye on her baby whilst watching out for predators and other looming dangers.

On average, rhinos need about eight hours of sleep per day. They can sleep either standing up or lying down. In a deep sleep, they will lay down with their feet curled up.

One of the “Big 5”, rhinos are popular sightings on safaris, but are also heavily protected. Their locations are not widely publicised, and they do not appear on “sighting boards” in the Kruger National Park and other areas.

The pangolin is an animal that many people have not heard of. Its appearance resembles that of a strange-looking reptile, but it is actually a mammal. They are the only mammal that is wholly covered in scales, which they use as protection against predators. Deriving their name from the Malay word for “one who rolls up”, they can curl themselves into a tight ball when threatened.

The current population of pangolins in the wild is unknown. What is known is that they are the most trafficked animal in the world, with around 100,000 per year trafficked into China and Vietnam. There are eight species of pangolin – four in Africa and four in Asia – and they range in classification from “vulnerable” to “critically endangered”. Last year, 97 tonnes of pangolin scales, equating to 150,000 animals, were seized in Africa on their way to Asia. The illegal trade in these animals is so rife that there are reported to be 159 known smuggling routes, and sales of their scales brazenly appear on social media.

Rhinos are facing the same grim future. There are only 6% of the world’s rhinos left, with approximately 5,000 black rhinos and around 18,000 white rhinos remaining. Poaching has increased by a whopping 9,300 percent in the last 13 years, with three rhinos killed every day. At these levels, black rhinos are expected to be extinct in the wild in the next two years, with white rhinos expected to last only ten years. So why are these animals being poached? Simply for the rhino’s horns and the pangolin’s scales, which are abused and used in traditional Chinese medicine across Asia. Rhino horns are known as a symbol of wealth and status, whilst pangolins are also poached for their meat, which is considered a luxury food, and their skins are used in fashion. These horns and scales, however, are made of keratin, the same protein found in human hair and fingernails. There is no medicinal quality to this substance whatsoever. These animals are being slaughtered needlessly, but there is a huge black market behind this poaching, with rhino horns being sold for more than gold and cocaine. Pangolin scales are cheaper but are still sold for over $3,000 per kilogram.

Do not become part of this ravenous industry. Be sure to avoid purchasing any products with pangolin scales or rhino horn, ranging from traditional medicines, pangolin wine and jewellery, leather, and rhino trinkets. The epicentre of the rhino poaching crisis is South Africa and it is critical that organisations work together across the country to stamp out this destructive industry.

Captured in Africa Foundation’s partner organisation, Pit-Track K9 Conservation & Anti-Poaching Unit, is one such organisation working tirelessly to save the iconic rhino. Over the last 16 years, the unit has undertaken incredible work and made a real difference in protecting these animals. The unit comprises highly trained and heavily armed trackers and their specialist tracking dogs, to guard entry and exit points of reserves and detect weapons going in and horns coming out of reserves. Pit-Track protects a third of the world’s wild rhinos and is deployed in various areas across South Africa, including the Greater Kruger area, and other private sanctuaries and reserves.

Pit-Track works together with the Council of Contributors and Care for Wild Rhino Sanctuary. The Council of Contributors focuses on organisations working towards saving rhinos, partnering with them to provide support and assistance for their work. They contribute funding for up to 12 projects per year, including for rhino orphanages, anti-poaching units and equipment, and adult rhino rescues. The Care for Wild Rhino Sanctuary, located in Mpumalanga, South Africa, provides care and rehabilitation for rhinos, working towards releasing them back into the wild. They also work with local communities to encourage them to see the benefits and importance of conserving rhinos to help solidify their future.

There are specialist studies and programs being undertaken in South Africa to research and better understand pangolins, with work being done on breeding, rescuing and rehabilitating injured animals. Unlike many animals, they are very difficult to keep in captivity due to their special diet and incredibly fussy eating habits, which makes rescuing and releasing them a significant challenge. In a world first for the region, last year seven pangolins were reintroduced into a private game reserve in KwaZulu Natal, and five remain there today. Work is also being done to train rangers and wildlife authorities, and to educate people, government and communities to better understand the importance of these animals, in an effort to ensure their survival.

Captured in Africa Foundation’s director, Drew Abrahamson, was involved in one of the first successful pangolin rehabilitation programs. Baby pangolin Sid was hand-raised after being found in a hessian sack attached to his mother, who had been the victim of an unsuccessful poaching attempt. His mother survived but was too weak and stressed to care for her baby. At a rehabilitation centre, Sid was looked after until he was released back into the wild. Drew Abrahamson with Sid the Pangolin © Captured in Africa Foundation

So how can you help the Rhino and Pangolin?

You can follow the pack that helps the crash on Pit-Track’s Facebook page. Keep up-to-date with their work on the ground in South Africa, and rhino conservation issues generally. Help to raise awareness of the issues facing rhinos and the ongoing battle against poaching. Donations to Pit-Track’s work can be made through Captured in Africa Foundation’s website. Being our partner organisation, we work hand in hand with all of Pit-Track’s conservation initiatives.

One of the most important ways you can help pangolins is to educate and raise awareness about them. The more we know about them, the more we can help them. They are Africa’s “little guy” and they are relying on us to save them.

Join us again next week for our last instalment of this series – our discussion on Africa’s best friends.

If you want to hear more, please send us your topic suggestions – we’d love to hear from you!

Meanwhile, please stay safe and be good to one another.