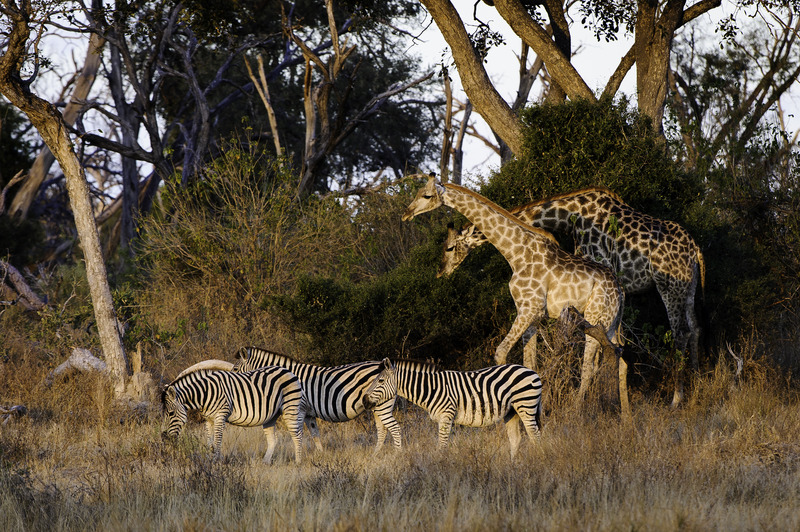 By CapturedInAfricaFoundation28th Jun 2020Uncategorised
No Comments

We finish our four-part series on Africa’s Treasures with some animal friends.

Anyone familiar with the “Madagascar” movies would know Melman the Giraffe and Marty the Zebra, who are friends in the cartoon world. But did you know that in the real world they really are friends! Whilst they are quite different animals, they share the same habitat and, being herbivores, the same type of diet. They work naturally together, hoof-in-hoof, to survive in the African savannah.

Elegant and graceful, giraffes are the tallest mammals in the world, reaching up to nearly six metres in height. There are four species of giraffe – the Masai, Northern, Reticulated and Southern Giraffe, with a further five subspecies, including the Rothchild’s Giraffe and South African Giraffe. Listed as “vulnerable”, with their numbers decreasing, there are approximately 111,000 giraffes in the wild. The West African Giraffe is the most endangered subspecies, with only 600 remaining. They have lost 40% of their population in the last 30 years.

Giraffes have been fascinating us for thousands of years. Some 8,000 years ago, the prehistoric Saharan culture of the Kiffians produced a life-size rock engraving of two giraffes, known as the largest rock art petroglyph in the world. The giraffe also has its own Egyptian hieroglyph. They are popular features of African folktales, with one such tale telling the story of how the giraffe became so tall – from eating too many magic herbs. In modern Kenya, the giraffe depicts their god Mda. The giraffe is also the national animal of Tanzania. A group of giraffes, appropriately known as a “tower”, can range from a few animals up to over 50, but are usually in groups of around six. They eat up to 34kg of food per day, predominantly the foliage of trees, but also eat shrubs, grass and fruit. When stressed, they will chew bark, and can also eat bones from carcasses to help with calcium. With a highly efficient digestive system, they can eat less food than many other herbivores because the foliage of trees has more concentrated nutrients. They get most of their water from their food, meaning they can go a number of days without drinking. They are non-territorial and travel long distances to find food.

Baby giraffes have a tough introduction to the world. Their mothers give birth standing up, meaning the baby falls over 1.5 metres to the ground. Within half an hour of their birth, the baby can stand, and can run after just ten hours. A fascinating behaviour of male giraffes is known as “necking”, which involves rubbing necks and swinging around to land blows on their competitor, which is used to establish dominance. Youngsters use these behaviours as training to fight later in their lives.

With their unique anatomy and circulatory system due to their size, NASA has undertaken research in relation to giraffes, particularly the blood vessels in their legs, to help them design space suits for humans.

There are three species of zebras – the Grevy’s Zebra, Mountain Zebra and Plains Zebra. With less than 2,000 remaining in the wild, the Grevy’s Zebra is endangered, whilst the Mountain Zebra is classed as vulnerable, with around 35,000 left. These species have a lot more stripes than the Plains Zebra, which is classed as “near threatened”. There are between 150,000 and 250,000 Plains Zebras in the wild, although their numbers are decreasing. They are extinct in the countries of Lesotho and Burundi.

Zebras live in a close-knit group of up to six females, with a dominant male and their babies. A group of zebras is known as a dazzle, which is the effect they have on predators. If a predator injures one of their group, its mates will circle the predator in an attempt to scare it away. They will also rally around the injured animal to protect it.
Zebras graze predominantly on grass, but also eat leaves and stems. They make a number of noises, some similar to a horse, when greeting their mates, but also have a high-pitched bark-like noise which is used to find their mates in the herd. They can run faster than a lion, meaning they have a chance of escape when they come hunting. Even babies can run within hours of their birth.

If zebras provide a dazzling effect, how do the babies find their mothers in amongst the herd? They spend their first few days alone with their mother, away from the herd, during which time the baby studies its mother’s stripes to learn an imprint of the pattern, and learns her sound and smell. This allows the baby to easily identify its mother when they return to the herd. One of the most puzzling things about zebras is their colouring. Are they white with black stripes, or black with white stripes? Consider the puzzle solved – they are black with white stripes!

Did You Know?
A zebra’s stripes can disperse over 70% of their heat, which stops them from overheating in the harsh African sun. The black stripes are light-absorbing and the white stripes are light-reflecting, giving the zebras built-in air-conditioning!

Both giraffes and zebras have unique coat patterns, with no two animals alike. Some of the characteristics of the mother’s patterns will be inherited by her babies. Both patterns are useful as camouflage against predators – giraffe colours blend in with the savannah, and zebra patterns can confuse both insects and predators, who see in black and white and can’t distinguish between individual animals. As well as camouflage, their coat patterns help to regulate their body temperature. Watching giraffes roam the plains can be calming and serene. Zebras, on the other hand, offer a fun type of entertainment. These quirky animals will run around playing, huddle in groups and even lean on one another, prance and dance around, and show their teeth in what looks like a cheeky grin. Giraffes and zebras have other grasslands friends too. Impalas and wildebeest (also known as gnu) are often seen grazing alongside giraffes and zebras. With varying eating habits, there is no competition between them for feeding, so they are happy to live in harmony with each other. Giraffes can feel safer with wildebeest and zebras nearby, as predators are more likely to go for the smaller animals than them. The height of giraffes can be helpful to zebras and friends, as they can see approaching predators from further away than the shorter animals. Zebras are known to be more comfortable in the presence of giraffes as they can watch the body language of their taller friends as they look out for threats, meaning they don’t have to spend as much time checking their surroundings for dangers. Impalas can provide a natural alarm system to the bigger animals with their distress calls when predators are
nearby.

Zebras will migrate up to nearly 3,000 kilometres for food. An incredible journey for zebras, wildebeest and other antelopes is the annual migration from Tanzania’s Serengeti to Kenya’s Masai Mara in search of food. Over two million animals take part in this natural phenomenon – bookings for this once in a lifetime experience can be made through Captured in Africa Foundation’s safari arm, Captured in Africa Safari for Change – all of the safaris and experiences offered are ethical for wildlife, local communities and habitat conservation.

Aside from their natural predators being big cats, wild dogs and hyenas, humans are causing the decline of giraffes and zebras, by hunting them for their skins and meat. With distinctive and attractive patterns, they are trophy hunted, so people can have a memento from selfishly destroying an innocent animal. Giraffes are also killed for their tails which, at up to one metre long, are used for flyswatters, thread and jewellery. All items made with any of these animal body parts should not be purchased. People may like to have giraffe or zebra skin mats or decorations, but synthetic ones should be bought in their place. What is it that makes people desire to decorate with the body parts of an animal? No-one needs to have any type of genuine animal parts to decorate their homes.

The bushmeat trade is causing havoc for many animals across Africa, with 301 species of mammals said to be threatened by this type of hunting. These meats are more affordable for poorer and rural communities, which increases demand. These communities need to be given access to cheaper and more sustainable sources of meat, such as chicken, beef and fish, to help reduce the need for bushmeat. The animals being hunted for their meat need to be better protected and the importance of conserving wildlife should be promoted.

Giraffes and zebras, like many other animals in Africa, also face habitat loss due to human encroachment and development, agriculture and livestock grazing on the same types of food. Organisations are working towards providing “wildlife corridors” for these animals to roam, and increasing habitats by planting trees and educating communities on sustainable and conservation-based agriculture and development.

“You can start changing the world for the better daily, no matter how small the action.”

With the help of people locally and around the world, we have high hopes that these species will prosper.

We hope you have enjoyed our series on Protecting Africa’s Treasures, have learnt new things about these special animals, and have been inspired to do what you can to help protect Africa’s wildlife.

If you’d like to assist Captured In Africa Foundation’s efforts for wildlife, please visit our donation page HERE or contact us by sending us an email with how you’d like to help – foundation@capturedinafrica.co.za