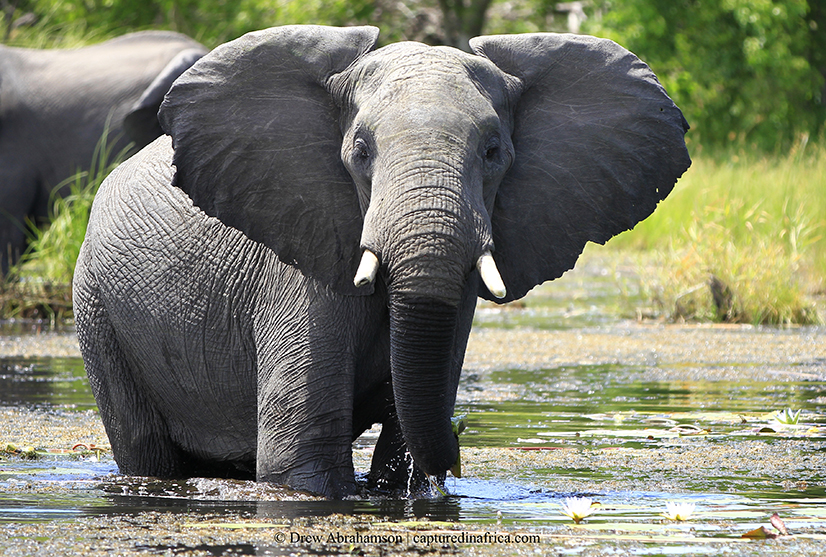 By CapturedInAfricaFoundation8th Jun 2020Uncategorised
No Comments

Welcome to part 2 of our four-part series on “Protecting Africa’s Treasures” – where we discuss a variety of African species, Captured in Africa Foundation’s work and the work of our partners in protecting these treasured animals, and wildlife conservation generally, including what you can do to help, no matter where you are in the world.

Matriarchal societies are rare in the animal world, but Africa has various species that fit into this structure. Today we are discussing two of these – the beautiful and grand African elephant and the often-misjudged spotted hyena.
These groups are led by the dominant female, which is usually the oldest and largest, and the mother of many of the group’s offspring. These matriarchies form close-knit and highly social groups, with the ruling animal serving a vitally important role – to protect her group, ensure they are fed, teach the young, and lead the pack to survival.

The African elephant, affectionately known as an “ele”, is the largest land animal in the world. Weighing up to six tonnes, they are an impressive animal, with huge ears in the shape of the African continent, and striking tusks. Sadly, it is these tusks that have led them into the dangers they face today. They are classed as “vulnerable”, with around 55 elephants a day being killed for their tusks. Their slaughter outweighs their births, leading to a reduction in elephant numbers on a daily basis. Although there are around 415,000 in the wild, they have suffered a reduction of 90% of their original numbers.

Poaching has taken around 111,000 elephants between 2006 and 2015. The elephant’s gestation period is nearly 22 months, with only one calf born at a time, meaning their rate of reproduction is incredibly slow. If the current poaching trends continue, these animals are facing extinction in the wild in 20 years.

Elephant tusks are seen as a status symbol in Asia, and although it is illegal to sell ivory there, it seems to make no difference. A 2018 study showed that in Vietnam, there were hundreds of shops selling ivory, with more than 10,000 items for sale, and 90% of these were pieces of jewellery. As with the lion bone trade, we have another magnificent animal being senselessly slaughtered for a superficial trinket. These items should not be purchased, nor these types of shops and facilities supported, by anyone who cares for animals and their survival.

In recent years, over 200 tonnes of ivory have been seized, which is a positive step, but it is not hard to imagine the amount that has slipped through the net. The illegal wildlife trade is thriving, and with so much money to be made, and so much corruption involved, it will be difficult to stop. Following Cecil the lion’s murder in 2015, steps have been taken to reduce the transportation of animal products, with some countries banning the importation of ivory and other items, and a number of airlines placing bans on carrying trophies from hunting, including ivory. These airlines need to be supported, and the airlines that still allow this to happen need to be pressured to implement their own bans.

“The love for all living creatures

is the most noble attribute of man.” – Charles Darwin

Elephants are incredibly important in the African ecosystem, due to their feeding and lifestyle habits. When digging in dry riverbeds with their tusks, they can create watering holes for other animals. Dung beetles thrive on elephant dung, which is full of seeds, which also helps to spread plants for other animals to feed on. Due to their sheer size and power, they can uproot trees, helping to clear the landscape for open plains animals, such as zebras and antelopes.

Like with many animals in Africa, habitat loss is also an issue. Elephants eat up to 150kg of food each day, across large areas, and with six to twenty members in a herd, they can consume entire crops of food in one night, which can drive farmers to retaliate. There are programs in place to help protect such crops and reduce these types of conflicts.

Often on the move in search of food, these herds are led by the matriarch, with other herd members in tow. Elephant calves are protected by the females of the group, and in particularly dangerous situations, they will be surrounded by the older females, creating an effective “elephant wall” around the young. Whilst their mothers will be a constant source of protection, herds also create a strong bond and source of security © Captured In Africa Foundation

An important organisation helping elephants in South Africa is Hoedspruit Elephant Rehabilitation and Development, South Africa’s first elephant orphanage. This centre rescues elephants orphaned by poaching and other issues and gives them a special adoptive family structure in their sanctuary. Each baby is rehabilitated and integrated into a herd to allow them to have the important family bonds that occur in the wild. With baby elephants very reliant on their mothers and relatives, this is a vital organisation to help these animals that simply would not survive on their own. Supporters can foster the centre’s orphans, which contributes towards their care. And who can resist a baby elephant? With a trunk that looks too long, short stumpy legs and big floppy ears, they are the epitome of cuteness. They are happy, fun and playful, and can often be seen running around with their herd, playing in water and rolling around in mud baths.

Baby elephants are always a hit on safari, with plenty of “oohs and aahs” coming from safari-goers.

Seen as a symbol of strength and power, the elephant is admired in many African cultures. South Africa’s coat of arms features elephant tusks, which represent wisdom, strength, moderation, and eternity. In the Maasai culture, there is a belief that the elephant is the second god because of its powerful voice and immense size. Elephants have appeared in mythology, symbolism, religion, and culture for generations. They are popular in various forms of art, from ancient to modern art, including music and movies. With humans being the elephant’s only predator, it is ironic that it is up to us to save them.

There is estimated to be between 27,000 and 47,000 spotted hyenas in Africa, with the largest numbers found in the Serengeti and Kruger National Park. They face similar issues to the African painted dog, including encroachment on their habitat by development and increasing human populations. They are subjected to conflict with humans, with some countries, such as Ethiopia, classing them as “vermin”. Whilst they are fully protected in other areas, including Tanzania’s Serengeti, they can be legally shot by hunters in neighbouring reserves. Snares also cause many deaths and serious injuries, with about 400 hyenas killed by these deadly wire devices per year in the Serengeti alone. They are also subjected to being poisoned, which can easily wipe out an entire clan, and are killed for food, medicine and even witchcraft. Like lions, they face the threat of being killed in retaliatory attacks by farmers when they have taken their livestock. Of all of Africa’s wildlife, this animal is probably the most misunderstood and overlooked. They were poorly portrayed in “The Lion King” as nasty scavengers, but this is largely inaccurate. It is true that they do scavenge, and they are opportunistic feeders, but they actually hunt and kill up to 75% of their own prey. To help hyenas, it is important to educate and raise awareness and understanding about these carnivores. They should not be seen as the “enemy”, but rather a highly social, distinctive, and special predator on the plains of Africa.

Unlike most other animals, female spotted hyenas are around 10% bigger than their male counterparts, which allows them to assert their dominance in the clan. Unusually, clan males have the lowest ranking, no matter their age and relationship to the matriarch. Hyena cubs follow in rank from their mother, pushing all siblings and males further down the pecking order, even the cub’s own father! With clans of up to 80 hyenas, the matriarch has an incredibly important role to play – the survival of her clan depends on her leadership and skills.

These unique animals play an important role in Africa’s ecosystem. They have incredible jaw strength, which allows them to easily chew through bones, effectively cleaning up the landscape by eating the remains of animals left by other carnivores.

Did You Know?
Spotted hyenas have a distinctive call that sounds like laughter. This sound is made when they are excited or nervous, and they make many other sounds as well. Their yells, whoops and cackles can be heard up to 5km away.

With an incredible sense of smell, they can smell dead and decaying animal flesh from up to four kilometres away. They are highly intelligent animals, and look out for vultures circling in the sky, indicating a kill is close by. They can then follow the vultures, who are the only real scavengers, and find their next meal. Although hyenas have a range of vocalisations, including grunts, growls and laugh-like sounds, their most distinctive is the “whoop” which, like a lion’s roar, can be heard many kilometres away. Spend a night in the African bush, and you’re likely to hear the carnivore symphony – roaring lions and whooping hyenas, which is a spectacular experience.

One of the Captured in Africa Foundation’s goals is to educate people inside and outside of Africa on the issues facing wildlife and the threats to the environment they live in. Conservation is vitally important to us, and we hope to motivate people across the world to understand these issues and take action to help.

You can help African wildlife, even from afar! Here’s how;

If you missed Part 1, click here to read it now. Join us again next week for our discussion on Africa’s most endangered animals.

Until then, please stay safe and look after each other.